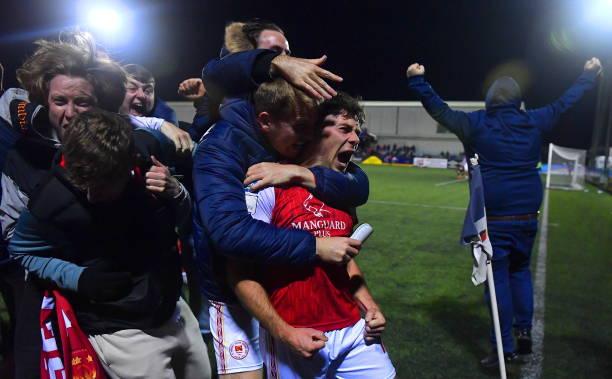 Adam O’Reilly was the stoppage-time hero as St. Patrick’s Athletic snatched all three points at Casey’s Field, stunning third-placed Dundalk with a much-needed 2-1 away win tonight. The result means the gap between them has been cut down to just a point, with four league fixtures remaining, as both remain firmly in the hunt for a UEFA Conference League qualification berth.

Saints snatch all the spoils at the death 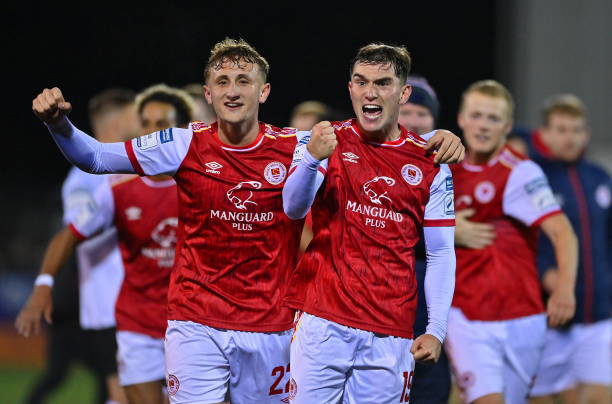 This encounter was billed as a definitive one for the visitors, given their European ambitions and how, with a tougher fixture schedule, achieving a top-three place wasn’t in their hands.

If they weren’t already aware of the high stakes involved here, Steven Bradley’s early chance should’ve whipped them into shape. A minute after the referee’s first whistle, he won possession in midfield, marauded through a few challenges and let fly with a low strike which skewed wide.

The execution wasn’t there, but the intention certainly was.

That shot set the tone for an end-to-end affair: one with penalty appeals, momentum changes, promising breakaways being repeatedly snuffed out, fierce fouls aplenty and more besides.

O’Kane danced past Sam Curtis twice in the same move, twisting and turning his way into the box after 11 minutes. Crucially, he got his angles all wrong that time – firing wide of the post.

St. Pats had to defend well in numbers early on, but got their reward soon enough in the 20th minute through a thunderous strike.

Barry Cotter’s transition from defence-to-attack has confounded opposition defences, though Serge Atakayi should’ve been more composed after linking up with Eoin Doyle in the final third.

Chris Forrester, with time and space on the edge of the area, let fly into the far corner with aplomb – showing his teammate how it’s done. 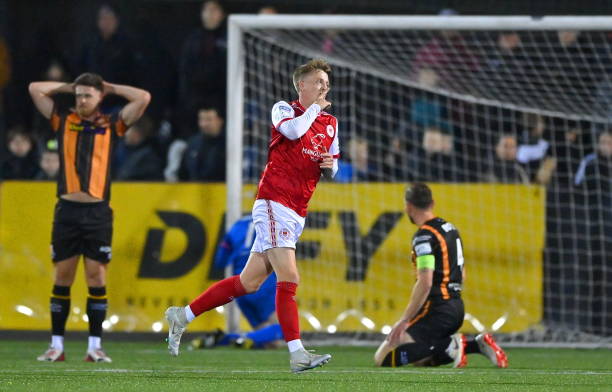 Forrester fired home with aplomb on the edge of the area, punishing Dundalk’s poor distribution

Yet how the opportunity to score came about was alarming. It feels typical given their recent poor form and his own pre-match comments, that former St. Pats centre-back Sam Bone’s sloppy pass out of defence set the wheels in motion for the game’s opener.

Anto Breslin pounced upon his unconvincing distribution, though Forrester still had plenty to do and it was a great strike worthy of its acclaim.

Greg Sloggett had a half-volley cleared off the line by Doyle after a well-worked corner routine, before his 100th club appearance was sadly ended prematurely through injury.

The affair became scrappy after his withdrawal, though the 26-year-old’s replacement – Robbie Benson – set up Dundalk’s equaliser in first-half stoppage-time just as fans were getting agitated.

He teed up O’Kane, who weaved his way towards the box and unleashed a swerving low effort into the far corner. 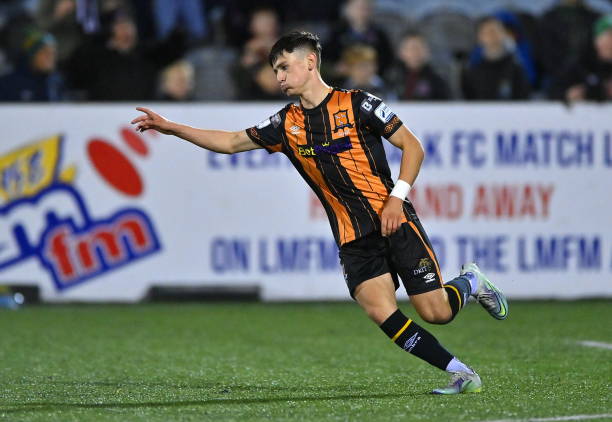 Finely poised at the break, St. Pats goalkeeper Danny Rogers was quickly called upon off his line to deny an overlapping O’Kane after the restart. The visitors produced sustained waves of pressure, probing as they searched to regain their slender advantage.

They would’ve had it sooner, had Andy Boyle not made two last-ditch defensive interventions in three minutes. He denied Doyle in different scenarios as Dundalk found themselves pinned back, even with Joe Adams coming close with a curling effort narrowly wide down the other end.

Changes aplenty came next, with two substitutes playing a pivotal role in a last-gasp winner.

Moments prior, Sam Curtis timed his last-ditch interception perfectly to outmuscle Benson as he bore down on goal without committing a penalty. Babatunde Owolabi and an overlapping Ben McCormack combined, with the latter’s reverse pass feeding O’Reilly in the area.

The ball evaded two backtracking defenders and he slotted home, sending the visiting fans into bedlam on the far side of the pitch with virtually the game’s final kick.

It was a crazy finish but one that felt inevitable given how the second-half unfolded. Now, just a point separates third and fourth with four league games remaining.

Will St. Pats build on this result? Can Dundalk quickly banish it from their system and finish strong to secure Europe next season?