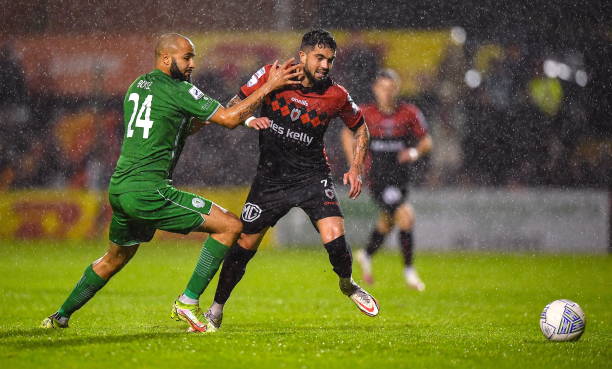 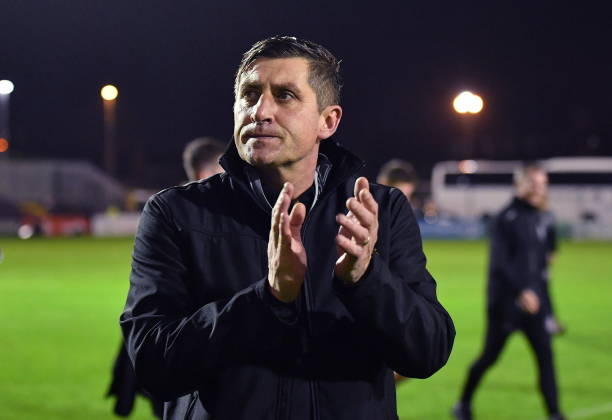 Two goals in three second-half minutes from Ethan Boyle and Filip Mihaljevic had Ollie Horgan ready to celebrate a vital return to winning ways, yet there was still an unwanted late surprise.

Bohs substitute Jamie Mullins’ incisive over-the-top pass sent the visitors’ backline into a frenzy, as they all simultaneously appealed for offside on the far side.

McDaid couldn’t believe his luck, watching goalkeeper James McKeown charge off his line to clear – yet missing the ball completely.

The mistake gave the midfielder free reign to slot home a stunning leveller, the latest twist in an uncomfortable rollercoaster ride for new manager Declan Devine watching from the touchline.

Former Derry City boss Devine knows his new side could’ve easily lost here, and it would have been all of their own doing despite a decent start to a slow affair in rainy Dublin conditions.

They almost scored early on from a sloppy backpass, while Jordan Flores and Kris Twardek were their most threatening outlets during a scrappy opening without many clear-cut chances.

Boyle avoided punishment after producing a cynical bodycheck to halt Bohemians’ well-worked passing sequence as they edged towards the area, before defensive teammate Conor Tourish made a last-ditch sliding block to deny Ethon Varian lurking in the box minutes later. 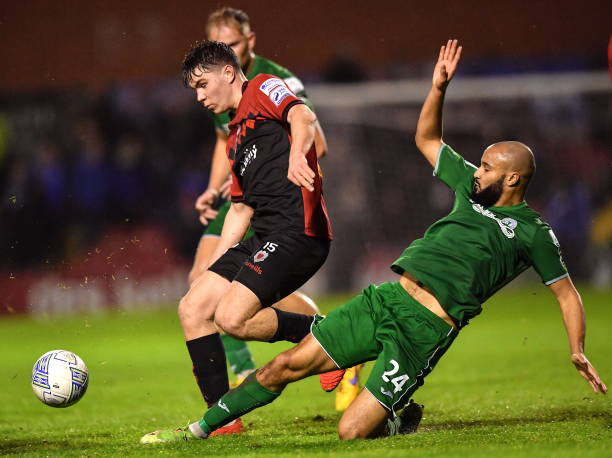 Boyle (right) tackling a busy James Clarke, who was an energetic spark in Bohemians’ midfield here

Ryan Connolly limped off midway through the first-half with a recurrence of the knock he suffered early on, with Ryan Rainey – his replacement – among multiple players also needing medical treatment for niggling injuries.

That made for a stop-start affair with neither able to truly settle into rhythm, though the first-half quickly turned from drab to dramatic in the final stages as Bohemians were lax at the back.

A disastrous pass by goalkeeper Tadhg Ryan gifted Barry McNamee a chance he should’ve buried, but instead the shot was parried to safety. A minute later, defender Rory Feely needlessly dived in late on Filip Mihaljevic as he cut inside the area and shaped to shoot.

Ryan bailed him out for what was an indefensible piece of defending, guessing the right way and thwarting the Croatian from the spot moments later, keeping the scores goalless at the break.

The second-half was much the opposite early on.

Bohs were sluggish out of the blocks, with Robert Jones heading over the crossbar from a rare corner – one created by Josh Kerr’s sloppy play in possession.

Jordan Flores made an important defensive intervention, sliding in to block a dangerous attack in its tracks as the visitors grew in confidence, fashioning half-chances without much effort. 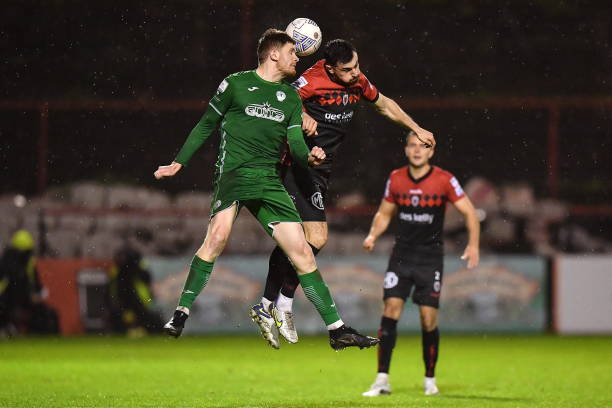 Flores (right) made defensive interventions, with Rob Jones (left) among those stirring after the break

James Clarke looked like a man possessed, creating three opportunities in quick succession as he probed to find the all-important opener.

His third was the best, displaying close-control dribbling to advance forward unchallenged before curling another strike goalwards — watching it whistle narrowly wide of the far post. Then eight minutes later, Feely atoned for his earlier error by turning creator for Bohs’ opener.

His forward forays would not go unrewarded as the 25-year-old drilled a low cross into the box – Ethon Varian fortuitously latching onto it, flicking into the far corner for his first goal since departing Stoke in July.

Without warning, it went from bad to worse for the hosts as Ciaran Kelly hesitated when trying to control a lofted ball headed back towards him. Mihaljevic was sharp this time around, sensing his indecision and pounced before beating Kelly to make it 2-1.

A three-minute sequence and suddenly, Bohemians were on the ropes. McDaid had the last laugh with his late equaliser, though he did look offside on first viewing. 2-2 it finished, a display reinforcing the belief Devine has plenty of development to oversee before the 2023 season.

As for Harps, they dropped two points in a must-win clash and as the battle to avoid automatic relegation hots up, their fate now rests in the hands of two teams with nothing to play for.