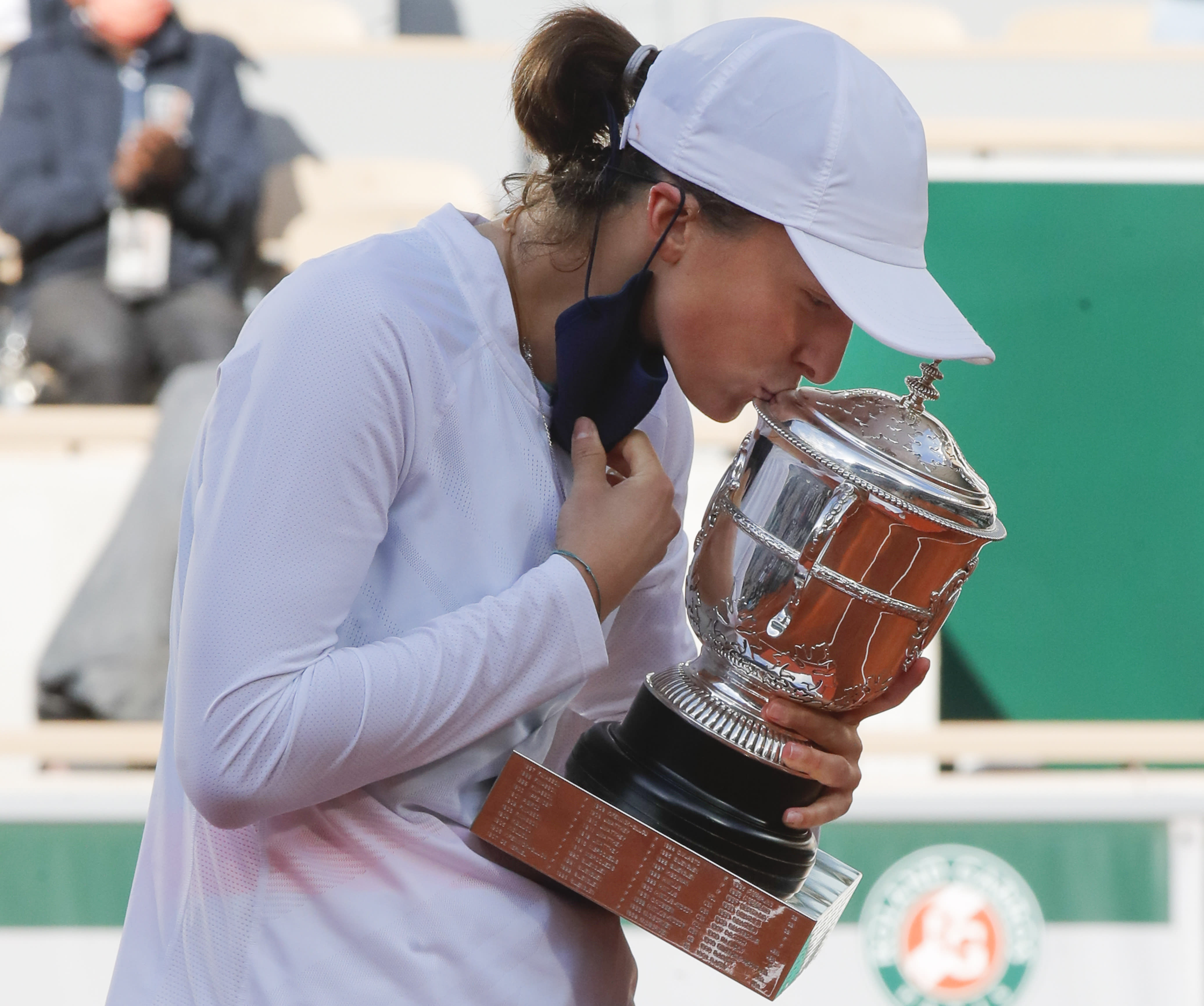 After a brilliant fortnight’s action where she blitzed through the competition with ruthless efficiency, Polish teenager Iga Swiatek topped that with another straight-sets victory – 6-4, 6-1 – to overcome Australian Open champion Sofia Kenin – winning her first Grand Slam title in style. 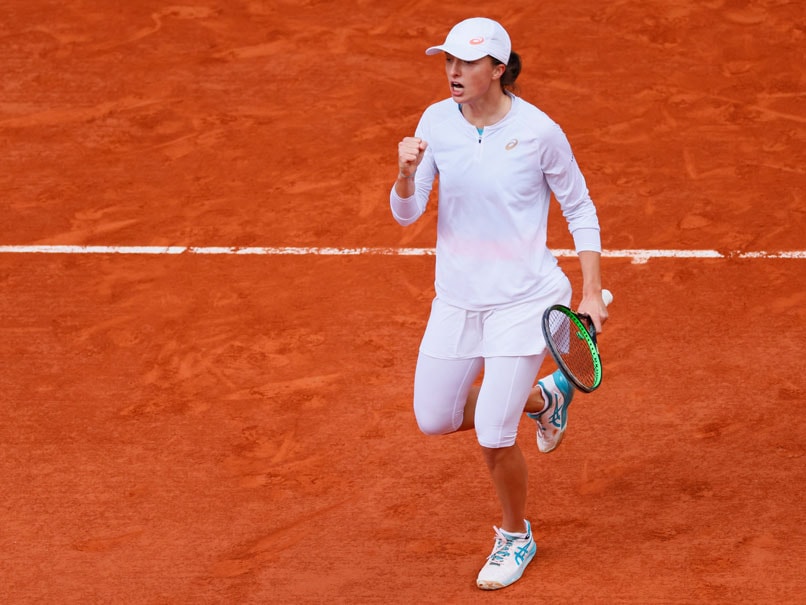 Swiatek prevailed again and will skyrocket to a career-high world no.17 in Monday’s rankings update

As she’s done throughout this tournament, Swiatek began quickly and raced into a service hold.

Her forehand flew off the racket and was immediately backing Kenin behind the baseline, even during the American’s service games, seeing that lead increase.

Mixing up shot variety is crucial to avoid predictability and the Polish teenager didn’t need to be told that, especially after presumably watching Djokovic-Tsitsipas yesterday.

She didn’t shy away from incorporating drop shots into her play and suddenly Kenin was down 3-0 in just eight minutes.

Armed with a 16-1 Grand Slam record this year, Sofia was bullish about her chances and needed a swift response if she wanted to keep this opening set relatively competitive.

Kenin fights back from 3-0 down, asks questions

Despite some resistance, the Australian Open champion got on the board at 3-1 and was gradually playing her way into the match. Those counterpunching abilities shown against Kvitova were on show as she had two opportunities – and only needed one – to break back at 3-2.

Swiatek’s shots were flying long and as Sofia marched towards her towel at the changeover, things were getting interesting.

Purposeful serving allowed Kenin to level things again at 3-3 and suddenly there was an early question for Swiatek to answer – how would she fare under increasing pressure?

She finished an excellent rally at 15-all on serve but followed that up with her second double fault of the match. Two drop shot winners and a crosscourt forehand that kissed the line presented her with a narrow 4-3 lead again.

Kenin, energised by Swiatek’s misses, was too aggressive and hit a forehand long before slamming her racket – she didn’t need telling how important that game could be.

It was important she didn’t dwell for long though, during a dicey service game.

After Kenin won the match’s longest rally to date (19 shots) with an inch-perfect crosscourt stroke, the pair exchanged errors and it made for tense viewing. Swiatek had multiple break point chances and deserved to win that game after firing a beautiful forehand down-the-line.

5-3 up and serving for the set, she hit exactly the same shot – another forehand winner as cameras focused on Kenin across the court with a face of anguish, like she was injured.

Despite a double-fault, she hit another winner and forced an error into the net as set point arrived, up 40-30.

It disappeared just as quickly, having appeared to second-guess herself mid-shot and hit a forehand into the net when going up the line was a far better option.

Kenin took advantage and a return ace was the exclamation point as she made it 5-4. Successive errors presented Swiatek with two more set points and she only needed one.

6-4 up, halfway to her first Grand Slam title. Which way would this one turn next?

Swiatek continues on the charge as Kenin takes medical timeout

After being broken in the opening game of set two, Swiatek responded brilliantly with a two-handed winner up the line to level things again at 1-1.

That face of anguish across Kenin’s face intensified as the teenager continued backing her up, using a powerful serve to allow her relative control of points.

Kenin had the trainer on at the next changeover, with an assessment of her left thigh muscle meaning she’d take a five-minute medical timeout and go off court momentarily.

Kenin took a medical timeout early in the second set, which saw her movement drastically restricted

Swiatek took the time to practice her serving and footwork as supporters cheered her on in what was a weird scene given the circumstances. Usually, players stay seated during these moments but with the wind in her sails, why would she relent?

Kenin returned, heavy strapping applied and clear restricted movement as she advanced too.

Despite winning the first point on serve, the American found herself down two break points and Swiatek’s lead increased to 3-1. It was about placement, rather than power, by this stage.

She knew Kenin’s movement was compromised and having forced her every which way in the first hour, it had clearly taken its toll against a determined opponent who couldn’t live with her court coverage. Swiatek’s 21 winners to eight emphasised the advantage continuing to open up.

She’d won 14 of the last 15 points, continued showcasing her agility on the stretch with low shots down the line and seemed alert to everything Kenin could throw. Sofia wasn’t going to lose with a whimper and unleashed successive return winners, but that was ultimately futile.

Championship point came after one hour 24 minutes and she didn’t need a second invitation, slamming a forehand winner to ice the contest – one that was long over by that point.

Post-match comments from both, what’s next?

Swiatek was understandably shaky during her post-match interview on court, in somewhat disbelief and equally inexperienced addressing moments like these.

Many believe this will be the first Slam title of many to come in future, but she said:

“I’m so happy, overwhelmed. Thank you everyone for tuning in, it was an amazing final.

Sofia, I don’t know if you’re injured but you did a great job anyway, I stayed consistent and wanted to play aggressive, like in previous rounds. Maybe it had to be like that, another underdog in women’s tennis won a Grand Slam..

I’m not really good at speeches, don’t know who to thank! I’d like to thank everyone who made this tournament possible – I’m pretty happy we can do our job, entertain people. It’s crazy for me because I was watching how Rafa [Nadal] lifted this trophy, crazy I’m in the same place.”

She got emotional talking about her father in the player’s box, a former Olympian, and the lessons he taught her growing up, before Kenin had some words to say.

“I want to congratulate Iga on a great match, played really well, to you and your team. I’d like to thank the crowd, it was finally good to see you guys, thanks for your support over the past two weeks, it really means a lot.”

Kenin will feel this was a missed opportunity to become a two-time champion, but she was ultimately beaten by a better player on the day – just like their 2016 meeting as juniors.

Although the injury clearly impacted her movement, she was already losing the match and it’s doubtful she would have recovered after being punished for a sluggish start.

It’ll be interesting to track Swiatek’s progress after this on other surfaces, answering moments of adversity well – things will only intensify from here as her stock continues rising overnight.