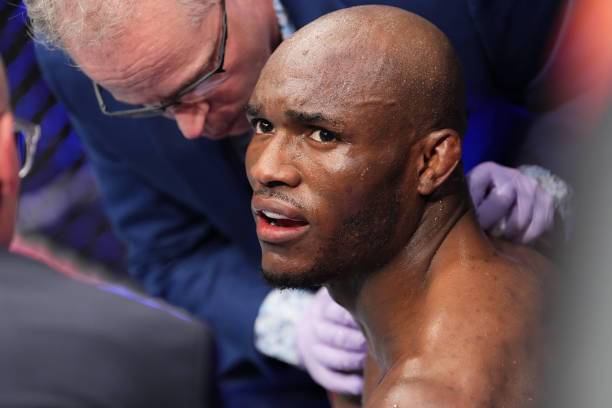 Kamaru Usman has revealed a readiness to travel to Leon Edwards’ home comforts, as he looks to regain his welterweight title in 2023 – with London’s Wembley Stadium mooted as a possible venue – having led 3-1 on all three judges’ scorecards but ultimately suffering a dramatic final-minute leg kick KO defeat at the weekend during their rematch in the UFC 278 main event.

comeback time: Usman willing and ready to venture to England 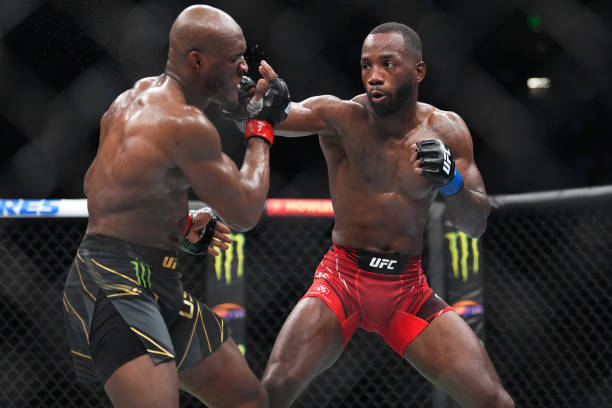 Edwards looked down and out, but rallied to reel off a remarkable final-minute head kick KO

“What else makes sense? I mean, look at the division. No, it’s absolutely what’s gonna happen next. I’ve talked to Dana [White], we’re gonna see.

I’ll let him do his job, and we’re gonna see what date makes sense. Top of next year, was gonna try and squeeze one [another fight] in this year, but probably top of next year, and I want to go to England.”

While it would’ve been nice for new champion Leon Edwards to remain active and potentially complete his first title defence before 2022’s over, a trilogy is next on the agenda.

That much was confirmed by UFC president Dana White during the post-fight press conference, as well as the two combatants battling for 170lb gold at a humid Vivint Arena in Salt Lake City.

Usman praised his foe on producing a great shot late to emphatically snatch victory from the jaws of defeat, and is upbeat about travelling to England for their trilogy bout – likening it to the continent of Africa in a way, presumably because of the country’s Afro-centric diverse culture.

“I’ve been feening to go, I feel like England is my second home now, and it’s half Africa. People don’t know that, so it’s time to go over there and entertain my English people, and what better story? You couldn’t write this any better.

So I’m excited to see what’s next, and we will definitely figure something out. It was a great shot.

I’m talking Hail Mary in the Super Bowl, last 10 seconds, hats off to Leon. It’s not hard at all, you know how many people I’ve done that to? It happened.

That’s the beautiful thing about this sport, it happens, but we forget what was actually taking place in that fight, so I’m not down [about it] at all.”

During his appearance on Morning Kombat, former UFC light-heavyweight champion and Hall of Famer Rashad Evans – a close friend of Usman – was positively surprised upon hearing from Kamaru after travelling back to Florida with him on Sunday. He said this about his perspective:

“I asked how he was doing. He said, ‘You know, I feel very blessed.’ And it was something that kind of took me by surprise, because I didn’t expect those words to come out of his mouth.” But he said, ‘I feel very blessed, because it didn’t go my way last night, and it was a very fucked up thing that happened.

But I’m glad, I get an opportunity to show everyone once again how great I am. I’ll get to show my daughter what it means to fall down, have everything not go your way but then get up and still keep on going.’

When he said that, it gave me chills, because that’s a perspective you take once you have accepted it… I feel like he has planted the seeds for a big return.”