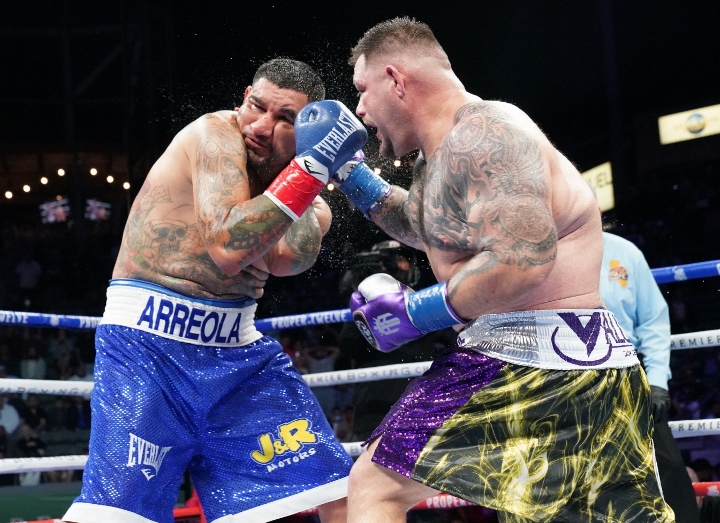 Having shaken some of his ring rust off – recovering from a round two knockdown – before outstriking Chris Arreola in their WBA heavyweight title eliminator, former unified world champion Andy Ruiz Jr (34-2, 22 KOs) expressed an interest in fighting another dangerous veteran – Luis Ortiz (32-2, 2 NC), who attended Saturday and is equally up for the challenge.

despite early scare, Ruiz returns with decision win vs. Arreola 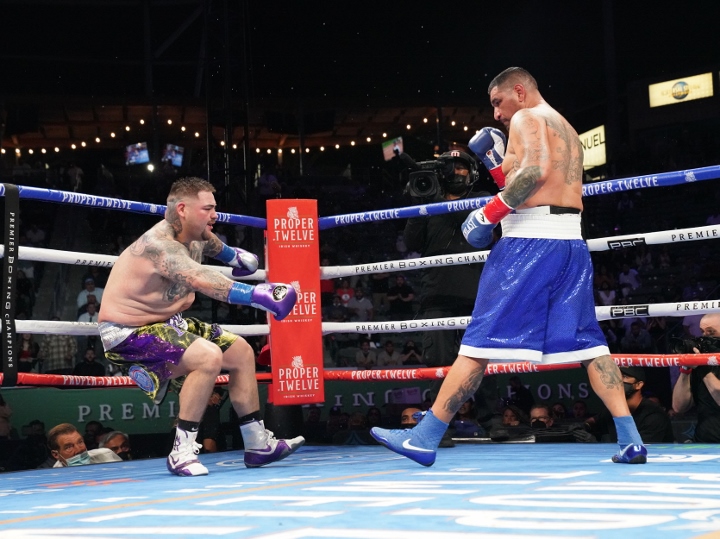 Ruiz had to recover from an early scare, after Arreola caught him clean in the second round

After all, this is a man who has said all the right things as he attempts to build himself back into the world heavyweight title picture. Joseph Parker’s former trainer, Kevin Barry, revealed his belief last week that Ruiz could end this fight before round six was over. That pick didn’t age well.

Instead, Arreola was left feeling like he missed a golden opportunity to stun critics while proving age is merely a number in an unforgivable sport, after a good start where he dropped the former champion in round two and a fiery exchange almost had him down again the following round.

another wily veteran in luis Ortiz next on the agenda?

Ortiz (#3 WBC, #7 WBA) shadow boxing during a media workout ahead of his second Wilder bout

Ortiz, even older than Arreola at 42, returned from a year-long layoff with a first-round knockout win against Alexander Flores last November. It’s why he’ll have been encouraged by what he saw ringside in California at the weekend, provided he still has the gas tank to go a full twelve rounds.

On Saturday, Ortiz’s head trainer German Caicedo said: “I am excited to see the winner of tonight’s fight, I have been assured that the winner is next.”

He was the closest to ending Deontay Wilder’s unbeaten professional record until Tyson Fury emphatically did so last February, competing for 17 rounds over two WBC title opportunities (March 2018, November 2019) before the same outcome: a vicious KO punch without warning.

It feels like more than a harmless coincidence that Arreola and Derek Chisora (32-11) appeared to suffer from the same issue – fatigue – in the later rounds vs. Ortiz and fellow former champion Parker over the weekend, during fights they weren’t only competitive in, but actually winning.

Questions will remain about Ruiz Jr’s punch resistance as well as whether the coaching change to Eddy Reynoso is helping him as he continues on his comeback trail, but for a man who has actively called out Wilder and others besides, this was an unspectacular but important victory.

On the possibility of facing Ortiz next:

“We’ve just gotta talk to Al Haymon [PBC founder, promoter] and I think that would be an exciting fight. I’m actually happy that it [win vs. Arreola] lasted 12 rounds, because we did the rounds. But you gotta get back to the gym.”

If Ruiz-Ortiz is actually given the green light to go ahead at a later date this year, it’d be another interesting matchup the Mexican must successfully navigate beyond – but if this weekend taught us anything, the experienced Cuban can’t afford it to go into deep waters like Arreola did.