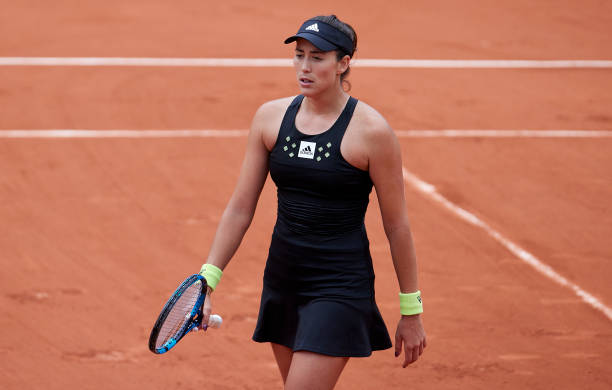 Four seeds fell on Day 1 at this year’s French Open, but none bigger than 2016 champion Garbine Muguruza – despite being a set and 3-2 up against Kaia Kanepi. Ons Jabeur similarly lost from a commanding position against Magda Linette, though the youngster who beat the Tunisian here in R4 last year showed edge to progress without playing well. Read on for more. 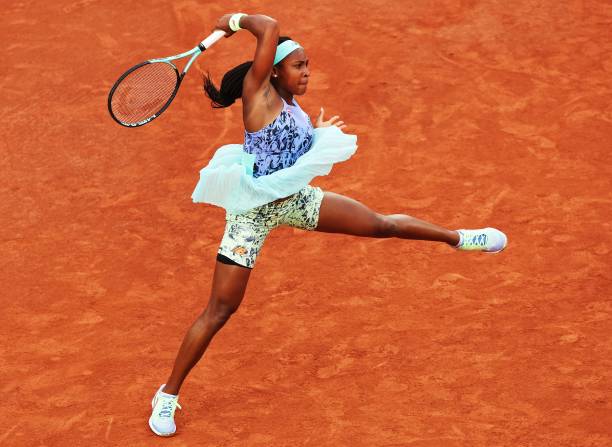 Gauff plays a forehand during her straight-sets win, which despite the scoreline was far from routine

Despite enduring an erratic evening’s worth of serving, last year’s quarter-finalist Coco Gauff got her French Open campaign off to a successful start against Canadian qualifier Rebecca Marino.

The 31-year-old’s forehand was firing on all cylinders early, helping her break the American teenager’s serve without warning to start.

Considering how she was swatted away by China’s Qiang Wang in R1 at the Australian Open in January, another early Major upset wouldn’t have been surprising if things continued that way.

In fairness to the teenager though, she did well to weather the early storm and after breaking straight back, worked tirelessly in creating some breathing space on the scoreboard.

Armed with her typically impressive court coverage, defiant shot defence and switching up looks through delicately-placed drop shots or incorporating slice, Gauff soon had something to lose.

Three set points came and disappeared at 5-3, as Gauff’s serving issues – a long-standing area of vulnerability – persisted. She recorded a grisly nine in set one alone and this stop-start affair quickly made for a jarring watch as Marino repeatedly failed to pounce on break point chances.

Even as the crowd on Court Simonne Mathieu tried their best to lift Gauff up between serves as the errors piled up, you can imagine how she felt. After an errant first serve, you often saw her rushing through the service motion for her second attempt – which is never a reassuring sign.

Clearly conscious something was wrong, rather than a one-off instance, an inability to arrest said slump for sustained periods in set one rather typified an unsettling issue she must clean up if she’s serious about embarking on another deep singles run here this year.

That she still managed to record a marginally higher first-serve percentage in spite of all her struggles (55-53) and logged almost half the unforced errors (22-14) in set one to her Canadian counterpart in a tough 55-minute first set rather spoke volumes. Better players will feast on that.

“It’s the first round of a Grand Slam so yeah I was nervous, Rebecca hits the ball hard and can play some good tennis which she really did, I had to stay patient and trust myself.

Don’t want to put any result-based expectations because you can’t control that, you can play well but sometimes they’re just better than you on that given day. I wanna have fun, enjoy myself, take it day-by-day.”

Belgium’s Alison Van Uytvanck is next in R2 on Tuesday after the 28-year-old, a 2015 quarter-finalist here, benefited from Ann Li‘s shoulder injury retirement though the American led 6-3, 3-2.

This section of the draw also features Estonian giantkiller Kaia Kanepi, who recovered from 6-2, 3-2 down to overwhelm two-time Major champion Garbine Muguruza [10] elsewhere on Day 1.

This 2-6, 6-3, 6-4 result means the inconsistent Spaniard, who won the WTA Finals to finish 2021 at world no. 3, has now been a first-round casualty at this tournament in successive seasons.

Speaking of early departures, Ons Jabeur – who missed out through a back injury in Melbourne but has since won the Madrid Open and was a beaten finalist in Rome earlier this month, lost her grip on a big lead to crash out 3-6, 7-6 (7-4), 7-5 against Poland’s Magda Linette. 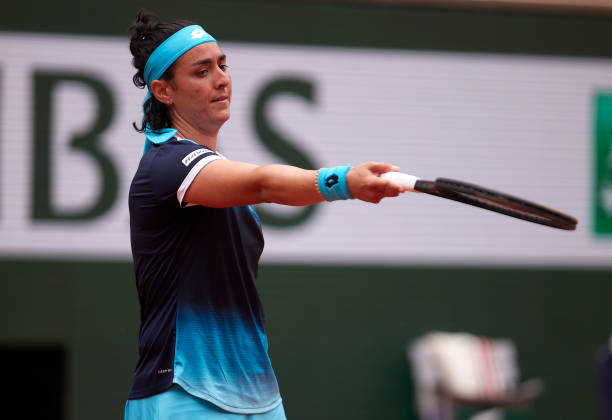 Linette has never gone beyond the third-round at a Major in 26 previous main draw entries, but will fancy her chances in a section featuring Emma Raducanu and three-time Slam champ Angelique Kerber – Martina Trevisan vs. Harriet Dart winner is up next for the Pole on Tuesday.

Unlike the year’s other Grand Slams I’ve covered recently, I’ll be working through this one so cannot commit to detailed daily reports. Nonetheless, the main draw action continues tomorrow and I’ll provide pieces when possible so be sure to stay tuned to moandsports.com for more.