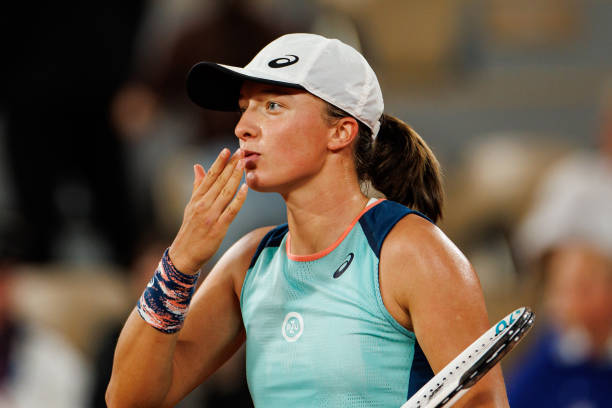 There were routine R1 wins for the sport’s two world no. 1s, sandwiched between a welcome return for the King of Clay. Elsewhere, the women’s defending titlist was stunned by a determined Frenchwoman on home soil, before two Major winners almost 15 years apart in age both showed steely resilience, recovering from precarious situations to seal their R2 berths.

Easy as one, two, three 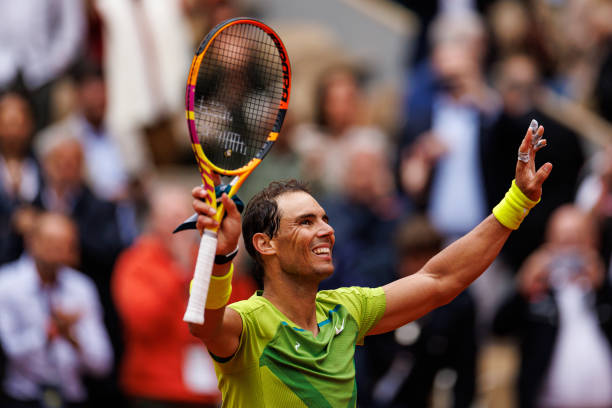 Australian Open champion Rafael Nadal‘s quest for a record-extending 14th Roland Garros title began without a hitch, as he eased to a straight-sets win over Australia’s Jordan Thompson.

The Spaniard, whose recurring chronic foot injury resurfaced in Rome earlier this month, has a long way to go before thinking about making more history but as has often been the case with him, patience is paramount as he goes through the gears and builds up form over the fortnight.

Most match wins at Grand Slams:

It’ll be interesting to see what version of Corentin Moutet shows up in midweek, as a first meeting between the pair awaits. The 23-year-old wildcard, unpredictable but often capable of excellent tennis, rallied from a set down to down 2015 titlist Stan Wawrinka — 2-6, 6-3, 7-6, 6-3.

Iga Swiatek dropped just two games against Ukrainian qualifier Lesia Tsurenko to kick off the day’s action on Philippe Chatrier, before Frenchwoman Diane Parry rallied from a set and break down (1-6, 0-2) to rapidly turn the tide, sending defending champion Barbora Krejcikova out.

Although she’s been sidelined with a shoulder injury since February and hasn’t built up match sharpness, this was still a startling result – not least given the commanding position she had.

As far as unwanted statistics go, this result also marks the third time, after Anastasia Myskina (2005) and Jelena Ostapenko (2018), that a defending champion lost in R1 of her title defence.

Speaking of reigning titlists, there was no hiccups for 2021 victor Novak Djokovic – this the Serbian’s first Major outing since last September’s US Open Final after his well-documented COVID-vaccination stance and unprecedented deportation from Australia in January. 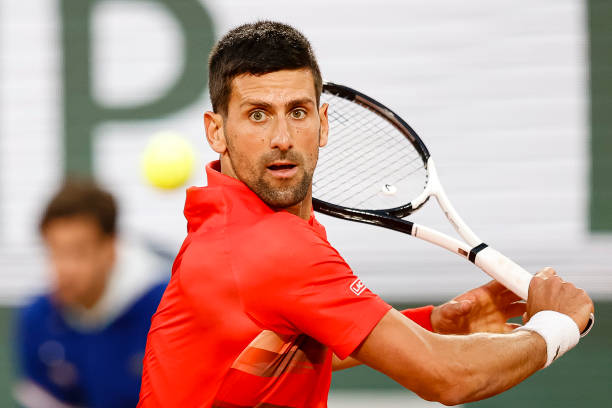 Japan’s Yoshihito Nishioka did well to make the first set a competitive watch for sustained periods, such was his speed and capability to consistently hang in rallies. However, the world no. 1 pounced on an abrupt break of serve at 4-2 and never looked back: 6-3, 6-1, 6-0 the final score. 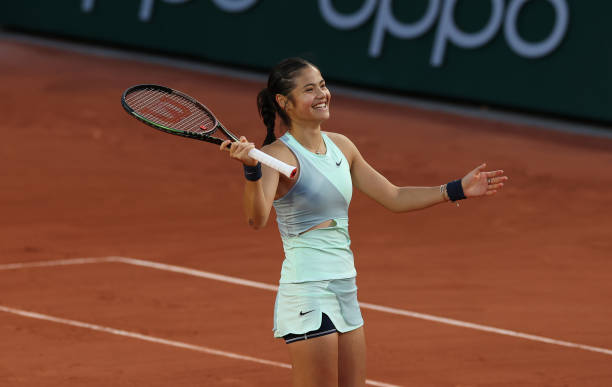 Noskova, who turned 17 in November, won the Roland Garros junior title twelve months ago and made history by becoming the youngest qualifier into the main draw at this Major since a 16-year-old Michelle Larcher De Brito did so in 2009.

She’s the second-highest U18 in the WTA rankings (#158) and given how she played for sustained stretches here, it’d be surprising if that number isn’t firmly in the single digits before 2022 ends.

During an era where the Czech Republic have quality and depth aplenty as far as women’s tennis is concerned, there’s no reason why Noskova cannot add to that in future.

Despite twice being down a break in set one, her ball-striking and decision-making under pressure kept Raducanu honest and often rather uncomfortable during their longer rallies.

You’d normally have backed the more experienced player to execute their shots better and ultimately emerge victorious from a tiebreak, though Noskova produced some inspiring tennis from 4-3 down — winning four straight points to seal a one-set advantage with aplomb. 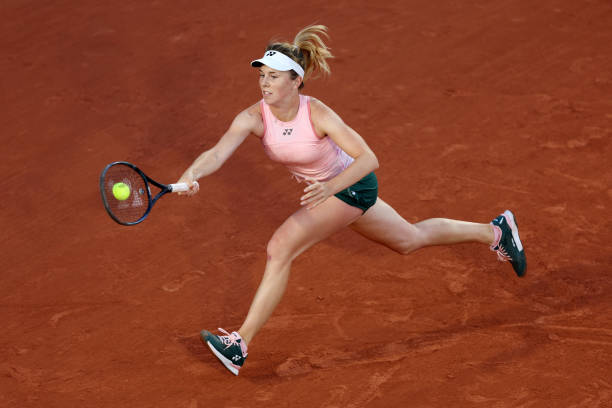 Crucially though, neither player could consolidate a break of serve in set two and she ran out of steam rather quickly after losing another tightly-contested set as French fans roared Emma on.

It was evidenced by the statistics: she had double Raducanu’s winners (48-24) but also more than twice as many unforced errors (54-25) in a gruelling two hour 40 minute contest.

Up next for Raducanu in R2? Indian Wells rematch vs. Aliaksandra Sasnovich

Although this was a battle of two teenagers albeit with different expectations, the Brit wasn’t the only Major winner who had to battle a multitude of emotions on court during tight moments. 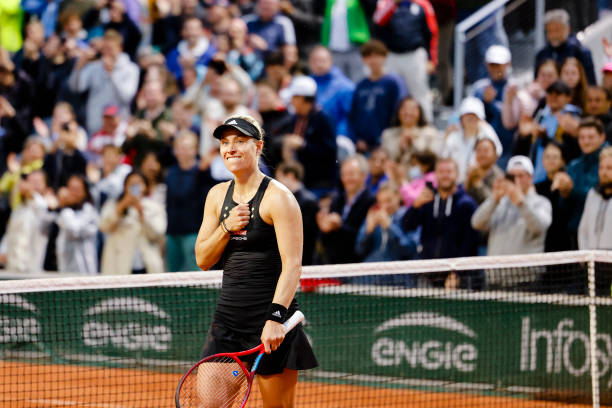 Back from the brink: Kerber soaks it all in, having saved two match points to book her place in R2

Visibly energised by a boisterous crowd in love with her guile and overall play on one of the outside courts before rain halted play for the day, Kerber was much more decisive behind serve (88% 1st serve, compared to 64 and 65 in first two sets) and played the bigger points better.

She acknowledged the crowd’s adulation but it’ll be interesting to see how the reception is on Wednesday, as she’ll play French teenager Elsa Jacquemot – a junior singles champion in 2020 – after the 19-year-old was made to work hard for a 6-3, 6-3 win over Britain’s Heather Watson.

In a section of the draw initially featuring last year’s two WTA Finals players – who contested the finale – neither remain in contention for a deep run at this year’s Major after just two days’ play. 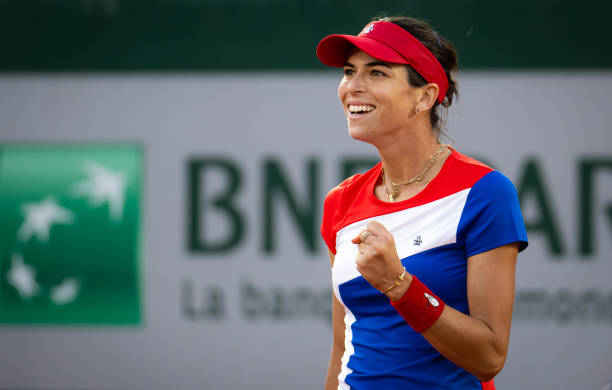 Tomljanovic, who reached her first Major QF, was made to work for her first top-10 win of the season

Although the Estonian was initially down 3-0 in set one, the fifth seed clawed her way back into proceedings as a pulsating encounter between them – mainly with baseline rallies – unfolded.

As has been the case with Aryna Sabalenka often in recent seasons, the 26-year-old’s high-risk, high-reward style of tennis didn’t pay dividends here (30 winners, 40 unforced errors) against a savvy Australian who has been agonisingly close to more top-10 victories and deserved this one.

I highlighted Osaka-Anisimova as a compelling R1 clash and it predictably lived up to the billing, though didn’t go the distance like their Australian Open meeting as the 27th seed won 7-5, 6-4 against a four-time Major winner whose form has continued stalling in recent months.

Unlike the year’s other Grand Slams I’ve covered recently, I’ll be working through this one so cannot commit to detailed daily reports. Nonetheless, the main draw action continues tomorrow and I’ll provide pieces when possible so be sure to stay tuned to moandsports.com for more!