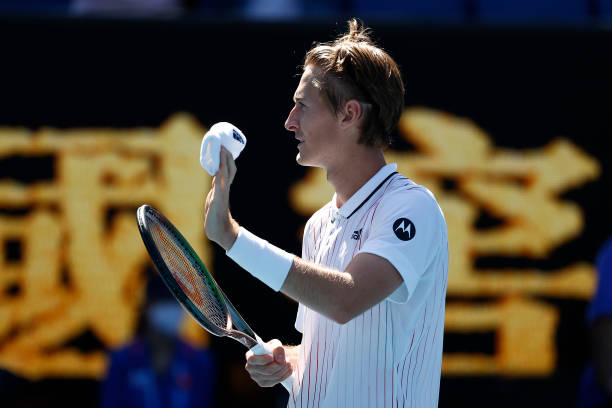 On an opening day overshadowed by news confirming defending champion Novak Djokovic had been deported after his visa was once again cancelled, there were big wins for American duo Sebastian Korda and Madison Keys among others — the former edged past 2020 winner Sofia Kenin (#11) in two tight sets, while Korda bested Indian Wells champion Cameron Norrie. 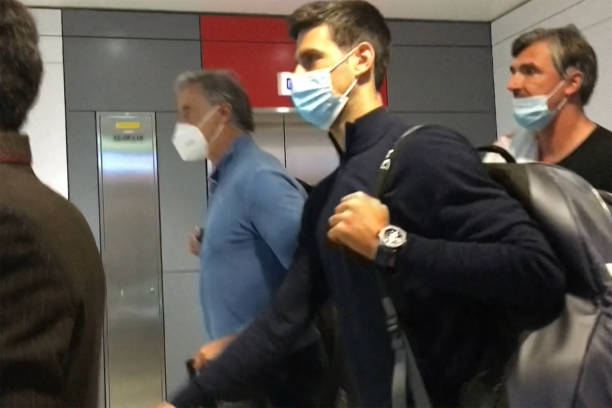 Novak Djokovic, 20-time Major champion, will not defend his Australian Open title after all. The country’s immigration minister Alex Hawke cancelled his visa on Friday, on the basis the Serb’s presence might risk “civil unrest”, describing him as a “talisman of anti-vaccination sentiment”.

In a statement, the 34-year-old was quoted as saying:

“I respect the court’s ruling and I will cooperate with the relevant authorities in relation to my departure from the country.

I am uncomfortable that the focus of the past few weeks has been on me and hope that we can all now focus on the game and tournament I love.”

He’ll “rest and recuperate” before making any further comment, with France – where Roland Garros is held in May-June – officially doing a u-turn themselves this past week on their vaccination stance for athletes entering to play elite sport. You’ll need to have a vaccine pass.

For further detailed reading on this subject:
Djokovic circus unleashes toxic chain reaction of mistrust and resentment
Out of the Australian Open, but what about the other Grand Slams?
Novak: What next for 20-time Grand Slam champion after Australia row?

Ons Jabeur unable to recover from back injury, withdraws 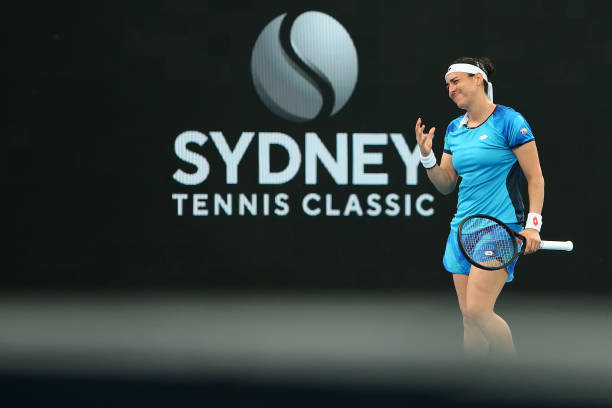 Jabeur suffered a back issue vs. Kontaveit at last week’s event and couldn’t recover from it in time

The first of three seeds in the women’s draw to fall, was an injury-related one – Tunisia’s Ons Jabeur before her scheduled first-round match against Spain’s Nuria Parrizas-Diaz early today.

She made the decision to withdraw after failing to sufficiently recover from a back issue which saw her retire prematurely against WTA Finals runner-up Anett Kontaveit in Sydney last week.

The 28-year-old Belgian, who had never before surpassed R1 at a Major, will enter new territory midweek in a section of the draw opening up nicely. Speaking of, fifth seed Maria Sakkari endured some teething problems, but eventually won 6-4, 7-5 against Germany’s Tatjana Maria. 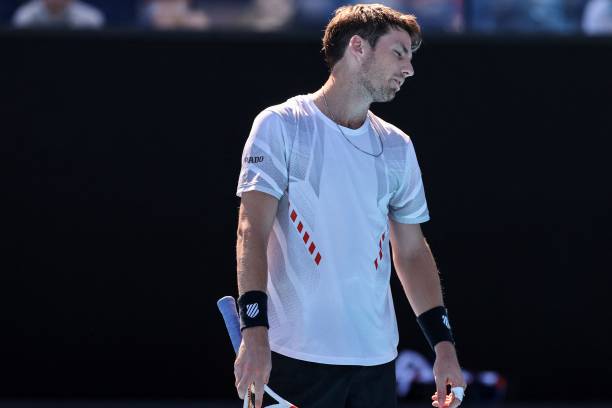 Although he was chasing an ever-increasing deficit from the start, this proved Norrie’s day to forget

Having tested positive for COVID and not played competitively since Carlos Alcaraz beat him to the Next Gen Finals title in Milan on Nov. 13, promising American talent Sebastian Korda began purposefully and never wavered against Britain’s top tennis player Norrie in the early hours.

“Korda is a great player, too good for me today. I was just disappointed with my performance, the way I executed, but had a great attitude and tried as hard as I could, right to the last point. He’s got a complete game, serves very well.”

Korda, who won the boys’ event in Melbourne four years ago, wasn’t too dissimilar to Norrie in terms of winners and unforced errors, but crucially played the big points much better.

Having done his dad’s scissor kick celebration after clinching match point, the 21-year-old will be hoping for a magical run like Petr had in 1998, where he won his first and only Major trophy.

Up next for him is exciting lefty Corentin Moutet, who recovered from a set down to beat wildcard Lucas Pouille 3-6, 6-3, 6-4, 6-3 in an all-French first-round affair.

As for Norrie, he started slow and was made to pay by a rising star that appears destined to be among the tournament seeds in future Slams. That will be no consolation to him, drawn in the same section as 2021 Wimbledon finalist Matteo Berrettini and the aforementioned Alcaraz.

As for Berrettini, it was much tighter against Korda’s compatriot Brandon Nakashima – but he won in four sets (4-6, 6-2, 7-6, 6-3) after a three-hour duel he would’ve preferred to avoid. Up next? Another young American in wildcard Stefan Kozlov, another first-time main draw entrant. 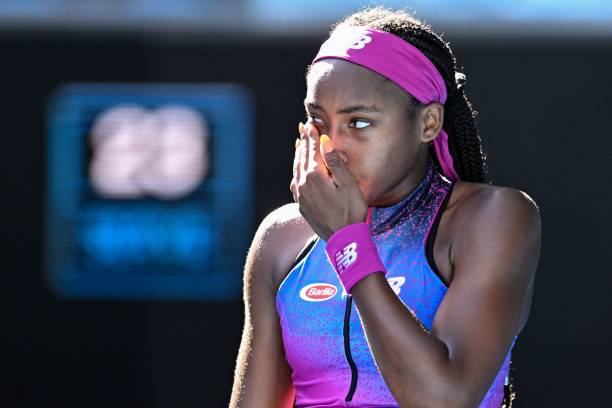 It was a rough day laced with far too many errors for Gauff, outworked by Pat Cash’s Chinese protege

After suffering a come-from-behind defeat against eventual Adelaide champion Madison Keys last week, Coco Gauff‘s 2022 season went from bad to worse with an underwhelming first-round showing on the big stage as she was beaten by Pat Cash’s Chinese protege Wang Qiang.

After a competitive start by both, Gauff’s errors continued to rise on a day where she became increasingly agitated at her inability to hit cleanly with consistency.

Limited depth on shots and inviting needless pressure during service games, it felt only a matter of time before Wang would grab a break. Once she did, the 30-year-old never let go – ending a 0-2 H2H record vs. the teenage American, who tallied a rough 38 unforced errors in 73 minutes.

“I don’t know if it was just an off-day or getting used to it [conditions]. Today I came into the match and the first couple of games, even though they were close, I was making more errors than I was used to.

Just everything disappointed me about today. I worked really hard in pre-season and felt ready to have a good run here, just didn’t play as free as I normally do. I think I was playing a little bit tighter than normal.”

Wang will play Belgium’s Alison Van Uytvanck on Wednesday for a third-round berth after the 27-year-old won 6-3, 6-4 against Spanish qualifier Cristina Bucsa, who after seven straight failed attempts previously, progressed into the main draw at consecutive Grand Slam tournaments.

Afterwards in the Eurosport studios, seven-time major winner Mats Wilander stressed a need for Gauff to improve tactically, in his role as one of their experts:

“For her to be a future Grand Slam champion, the pressure is starting to build, but she still has many years before she gets to her best.

She has to learn now how to figure out her opponent and all the things she needs to do to make them worse – you can’t always be perfect.” 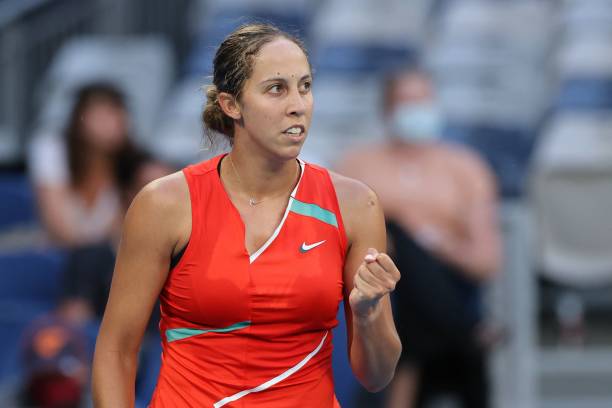 This felt like a R3 matchup and highlights the refreshing depth of the women’s game – these two would face off on Day 1. As I repeatedly hinted at last week, Sofia Kenin would find it difficult against an in-form Madison Keys, and that proved true in a match settled by marginal gains.

Elina Svitolina, who also won today 6-1, 7-6 against France’s Fiona Ferro, was on the receiving end of a whopping 14 aces by Keys during their Adelaide 2 first-round matchup seven days ago.

The 26-year-old American did one better by logging 15 in 90 minutes, against a Kenin display that would’ve normally been good enough to coast past most early-round opponents. Not here.

If you brush aside a first set tiebreak over rather quickly, then that notion was reinforced by some of the remarkable shot-making Keys produced in set two under pressure to sustain her high levels on the John Cain Arena. Not faultless and hard on herself, it bodes well for future rounds.

Keys’ backhand down-the-line winner kissed the line and while Kenin briefly fumed at how this encounter was slipping away from her reach, she then broke straight back in the next game.

As far as confidence was concerned, the damage was done. Kenin couldn’t consolidate that break, so Keys held firm to eventually emerge unscathed without the need for another tiebreak.

Post-match, Madison said she was ecstatic to be back in Melbourne after coronavirus saw her miss last year’s summer swing down under and her play shows just that. Up next is Romanian 23-year-old Jaqueline Cristian, after coming through 7-5, 6-4 against Belgium’s Greet Minnen. 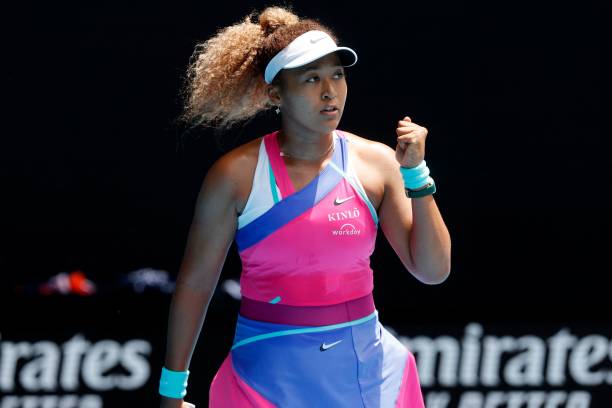 Despite a blissful start, defending champ Osaka had to fend off a spirited effort by Osorio

World number one Ashleigh Barty and this year’s defending champion Naomi Osaka remain set for a tantalising fourth-round meeting, after both came through their Day 1 assignments.

While the Wimbledon champion went through the gears rather smoothly and lost just one game against Ukrainian qualifier Lesia Tsurenko, Osaka had to silence some spirited firepower down the other end from Colombia’s 20-year-old Camila Osorio. – eventually winning 6-3, 6-3. 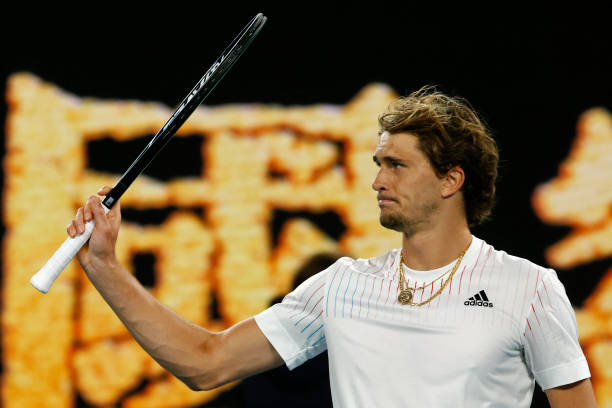 Zverev salutes the crowd after beating compatriot Daniel Altmaier, but was unhappy with his play

To cap the night session on Rod Laver Arena, Olympic champion Alexander Zverev was pushed and ultimately left unsatisfied by his showing against compatriot Daniel Altmaier.

What about the other Olympic champion? Swisswoman Belinda Bencic (#22) was one of the first seeds on court and didn’t waste much time, beating France’s Kristina Mladenovic 6-4, 6-3.

The second-serve yips that have limited his seemingly boundless potential in recent years returned, at least for a while. Altmaier was unafraid and played like it too, pushing him frequently during longer rallies while making some onlookers question whether an upset was on the cards.

Those troubling double-faults aside (6), Zverev got the job done. It seems commonplace that he has one of these matches, early in a Major tournament, so it’s reassuring to get it out of the way now while he’s not playing the level he expects of himself – hence the demonstrative demeanour.

But up next? He should prepare for another tricky opponent, fighting against the tide with home favourite John Millman midweek after a four-set win over Spain’s evergreen Feliciano Lopez. 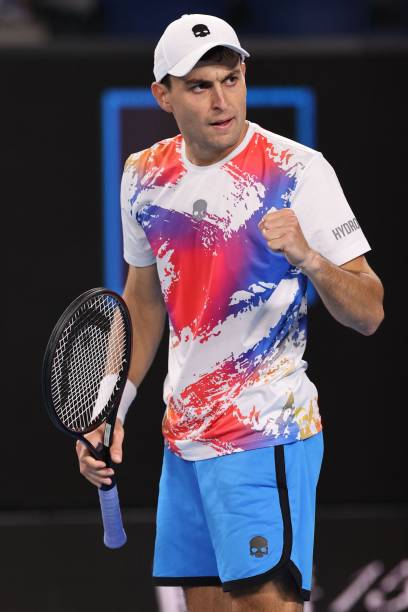 He recorded almost four times as many winners as Munar (87), simply overpowering the 24-year-old – but needed to play that aggressively, such was the resistance coming back at him with each point.