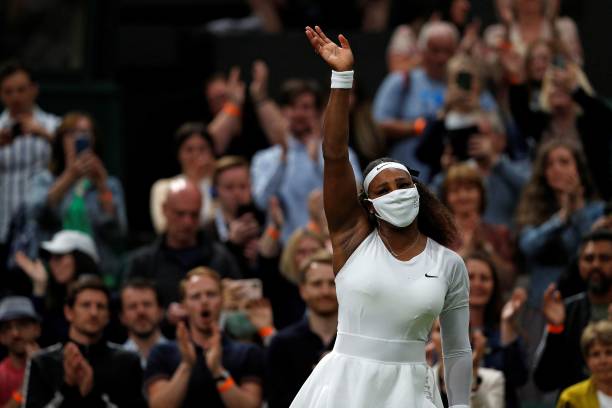 Serena Williams’ quest for a record-equalling 24th Grand Slam triumph, on the surface where she’s clinched six Major titles since beating older sister Venus to first win in 2002, is over on Day 2 – but not as you’d expect. The sixth seed slipped awkwardly behind the baseline, limped towards her chair and it was quickly clear she wouldn’t be able to continue through the pain. 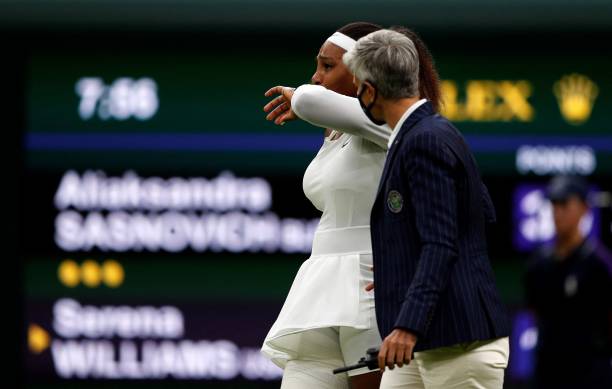 Today, Aliaksandra Sasnovich (world no. 100) earned her first win over a top-10 player for two-and-a-half years, but even the 27-year-old Belarusian wouldn’t have expected it to arrive the jarring way it did vs. seven-time Wimbledon champion Serena Williams on Centre Court at SW19.

She sported an apologetic look as they shook hands at the net and spoke about being excited to finally test her skills against the legendary American on BBC radio afterwards, but a competitive matchup was suddenly cut short after the slippery surface had come back to bite another player.

Having stormed into a 3-1 early first set lead, Sasnovich broke back on serve at 3-2 – the injury occuring during the previous game.

With heavy wrapping already on her right thigh, Serena tried to continue but within minutes of an injury timeout and treatment from the trainer, her tournament would end in abrupt fashion. 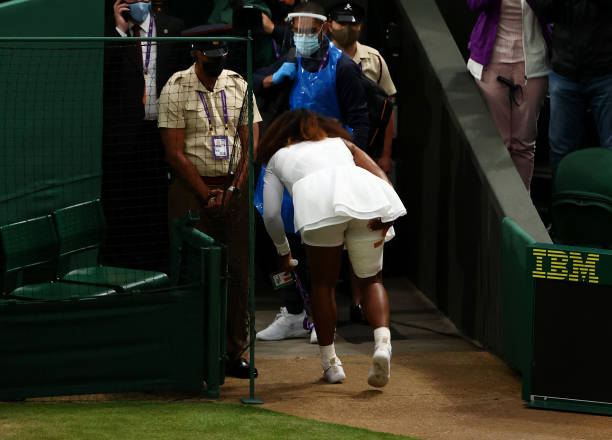 Serena limps off in sad scenes that ended another memorable day, this time on a low note

Movement severely impaired, she fell on the ankle and immediately had her knees on the turf after trying and failing to cover distance quickly enough while trying return a backhand slice.

She spun near the net after her decision to withdraw was clear, waved to the Centre Court crowd as she departed to a warm round of applause, before buckling over near an exit out of full view.

Defending champion Djokovic and Andy Murray were among those struggling to get to grips with the grass on Day 1, with the latter tweeting as much earlier tonight after Serena’s withdrawal.

Brutal for @serenawilliams but centre court is extremely slippy out there. Not easy to move out there.

Just hours prior, France’s Adrian Mannarino (world no. 41) landed awkwardly and also withdrew after suffering a knee injury – having slipped in that same area at the back of the court during his five-set round one encounter vs. eight-time Wimbledon champion Roger Federer.

What does her withdrawal mean for the rest of the pack? 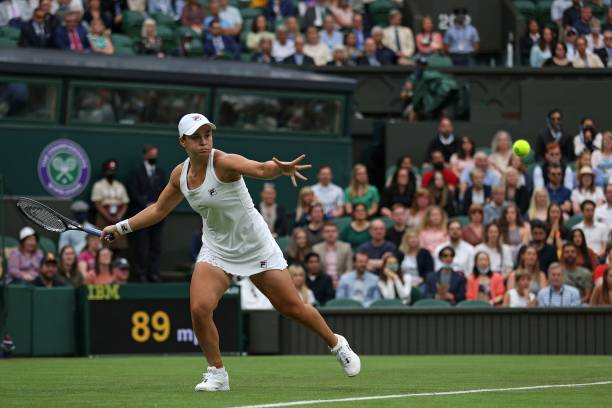 World no. 1 Barty – who has never surpassed round four in London – is among those impacted

Serena has suffered her fair share of injuries, both over the course of her illustrious career and increasingly of late. It’s to be expected, seeing as she’s 39, but while many critics will be quick to question whether this is the last we see of her at Wimbledon, it’s too early to answer definitively.

Instead, it’s important to focus on the immediate implications of her withdrawal and how that opens up a section featuring Belinda Bencic (#9), 2018 Wimbledon titlist Angelique Kerber (#25) and US teenager Cori Gauff, who reached her first Slam quarter-final in Paris earlier this month.

This section (1-4) also features world number one Ashleigh Barty and Ukraine’s Elina Svitolina (#3) among others, the latter teaching Gauff a valuable lesson in Melbourne earlier this year.

It’ll be interesting to see how the women’s draw opens up going forward as more seeds continue falling but, just like I said over the weekend, this freak injury is evidence that anything can happen in the early tournament rounds which has considerable after-effects for title challengers.

Defending champion Halep withdrew with a pre-existing calf injury that still hasn’t healed sufficiently. Kerber’s form has been patchy to say the least while two-time Slam champion Muguruza remains similarly inconsistent, either she’ll go on a deep run or lose in the first week.

Sasnovich is into round two of this Grand Slam for the fourth time in her eight-year professional career. Three years ago, she knocked out Petra Kvitova in a three-set first round thriller, before losing to defeated semi-finalist Jelena Ostapenko (#12) in Round Four later that tournament.

She’ll play either Japan’s Nao Hibino or Croatian-born American Bernarda Pera for a third-round berth, where a matchup with the aforementioned Kerber – another former champ – is possible.